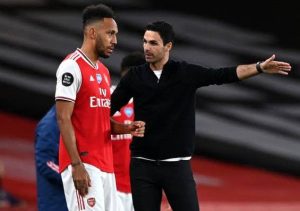 The Gunner’s boss Mikel Arteta has refused to rule out former captain Pierre-Emerick Aubameyang making an appearance against Norwich on Boxing Day.

The out-of-favour striker has not played for Arsenal since a disciplinary breach saw him stripped of his captaincy and left out left out of matchday squads for recent wins over Southampton, West Ham and Sunderland.

During interviews prior to those matches, Arteta categorically ruled out any chance of the Gabon international making an appearance for his side.

But speaking to the media on Wednesday ahead of the Gunners’ trip to Carrow Road.

The Arsenal manager gave a much more ambiguous answer when asked if Aubameyang might play.

“We will go game by game and we will decide the squad as we get closer to the game.”

When asked why his answer was less definitive than in previous weeks, Arteta said:

“That’s because we usually talk on MD-1, that’s when we decide the squad.

We have shown in this club, everybody can make mistakes and have different ways  of thinking and  acting, i’m completely open to that, it’s not about [having to make an apology].

Arsenal have hardly missed their exiled captain in recent fixtures, having won four games in a row and scored 14 goals in the process.

Three of which came from Eddie Nketiah, who has now scored five goals in three games in the competition this season.

The youngster is struggling for minutes in the Premier League.

However, and there are reports that he has rejected the offer of a new deal with Arsenal as the end of his contract looms in the summer.

Arteta insists he is keen for the 22-year-old striker to stay at the Gunners.

“With the way he’s training and performing he deserves more minutes regardless of what happens with any other player,”

“Every time we have played him, he has responded with goals, with assists, with his work-rate and he continues to do so.

He is getting better and better every day.
“He has the smell for goals. He knows where the ball is going to land.

His timing, his movement around the box, the capacity he has to finish with different [finishes] like he has today. We are really happy with him.”