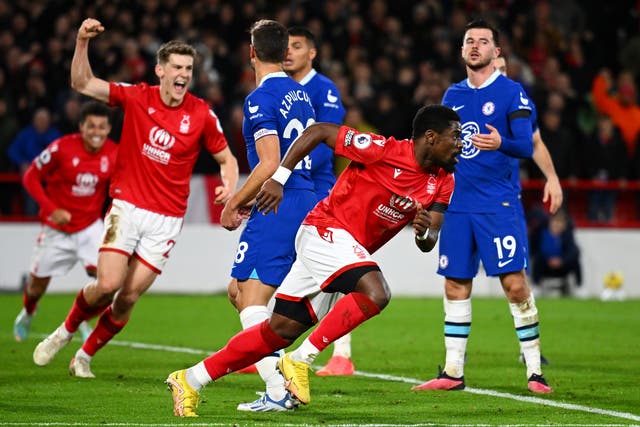 Nottingham Forest drew 1-1 with Chelsea at the City Ground but might have taken all three points after dominating the second half of an absorbing game.

Chelsea took the lead after 16 minutes when Willy Boly unfortunately deflected Christian Pulisic’s cross over Dean Henderson and against the crossbar, with Raheem Sterling smashing home a half-volley from the rebound.

It looked likely to be a straight-forward victory for Chelsea but Forest came out with a vigour the visitors couldn’t match in the second half.

Morgan Gibbs-White was very unlucky not to equalise when he volleyed Ryan Yates‘ pull back against the bar from the edge of the penalty area.

But the leveller eventually came from an unusual source when Serge Aurier latched onto Boly’s header from a corner and chested then volleyed under Kepa Arrizabalaga.

Both teams rise a position with the draw. Chelsea are up to eighth, while Forest are now third-bottom.