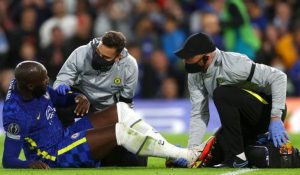 Chelsea frontman Romelu Lukaku and Timo Werner ready to miss some matches after being injured in the 4-0 Champions League win over Malmo,

Lukaku twisted his ankle in a tackle which led to a penalty and Werner hurt his hamstring while running – both in the first half.

Chelsea have a relatively straightforward run of games against Norwich, Southampton in the Carabao Cup, Newcastle, Malmo and Burnley.

Record signing Lukaku, 28, has not scored for Chelsea in seven games after four goals in his first four matches.

“It will take a while for both of them, and we will need more examinations to be precise.”

“They will be out for some matches.”

“If I knew what would happen beforehand I would not have done it (started the pair), but how can you know it before?”

“It was necessary that Romelu was on the pitch.

He started strong, I spoke to him about it, about mental fatigue carried around with him.

“But he’s our number nine and our reference up front. And the best thing for mental fatigue is a goal.

“He took the foul to win the first penalty so maybe without him it’s not 2-0.”

“The race is on, the guys who start against Norwich have our trust and we will try to find new solutions.

“We have won games before without Werner and Lukaku, we don’t want these problems too often but it happens during a season.”

Andreas Christensen put Chelsea ahead and Jorginho scored two penalties – either side of a Kai Havertz goal.

German Werner, 25, has only scored twice in 10 games this season.