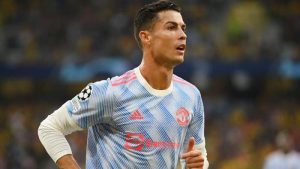 Manchester United Forward is now level with his former Real Madrid team-mate for most appearances in the competition.

The Portuguese star made his first appearance for Man Utd in the competition since 2009.

And, in his joint-record 177th appearance in the competition.

He marked the event in typical fashion with an early goal to match another milestone held by Messi.

Read Also: Arteta Reveals He Will Keep Ramsdale As Arsenal’s No 1 Over Leno

With his start against Young Boys, Ronaldo matched Casillas with a record 177 appearances in the competition.

It took the Portugal star just 13 minutes to open the scoring in Switzerland,

to put United 1-0 ahead, sealing in the process a share of another record.

Young Boys became the 36th different club he’s scored a Champions League goal against, with only Messi matching that mark.

36 – Young Boys are the 36th different team Cristiano Ronaldo has scored against in the UEFA Champions League,

with no player scoring against more (also Lionel Messi on 36). Collection.