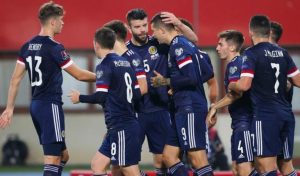 The Scottish Premiership is set to shut down for around a month in November and December of next season to accommodate the 2022 World Cup in Qatar.

Clubs are being consulted over plans to hold 16 rounds of fixtures between,

30 July and 13 November, before halting until 17 December – the day before the World Cup final.

With the Scottish Cup and Premiership play-off finals likely to be on the first weekend in June.

As part of the proposal – which is still to be finalised and approved.

The League Cup final would be on 26 February, with the semi-finals in early January.

The latter would follow a busy festive spell of fixtures, with clubs playing five matches in 15 days between 24 December and 7 January, including on Christmas Eve and Hogmanay.

The lower leagues are expected to continue during the top-flight shutdown.

Scotland will face Israel on Saturday and the Faroe Islands on Tuesday as they continue their attempts to qualify for the World Cup finals.