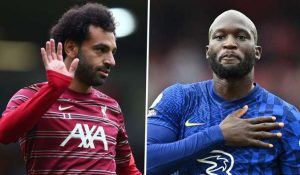 The Londoners may have discarded the winger in 2016, after just 19 appearances, but the Anfield icon holds no bitterness towards the Blues

At some point on Saturday evening, Mohamed Salah’s name will ring out around Anfield, loud and proud.

Liverpool fans adore their Egyptian King, the relentless, goalscoring genius who has lit up their world for the past four years.

and wouldn’t it be fitting if he were to get them this weekend, against the club that discarded him so swiftly during his first spell in England?

His time at Stamford Bridge was brief and unspectacular, over before it began.

There were just 19 appearances and only two goals; his career, and his name, has been made elsewhere.

Much like Romelu Lukaku, you could say. But while the Belgian has unfinished business at Chelsea, and has returned this summer to take care of it, Salah has no such desire.

As far as he is concerned, that chapter is well and truly closed.

He holds no bitterness towards his former employers, it should be pointed out.

He still has friends in West London, and those who worked with him at Chelsea remember a dedicated professional, one whose talent was obvious even if he rarely got the chance to show it on a weekend.

“In training, he was like (Lionel) Messi,” says former team-mate Filipe Luis. Frank Lampard and Didier Drogba have spoken in glowing terms about his application and attitude, while Oscar says Salah was “unstoppable in practice”.

So, why didn’t it work out for him, then? And why were Chelsea so quick to offload a player their manager, Jose Mourinho, had pushed so hard for?

Chelsea had pipped Liverpool to Salah’s signature in January 2014, paying £11 million ($15m) to take the then 21-year-old from Basel.

Ian Ayre, the former Reds chief executive, had thought he had a deal agreed, only for the Londoners to steal in late in the window. 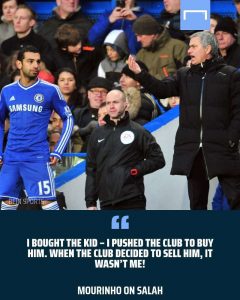 Mourinho fumes when it is suggested that he was the man who got rid of Salah from Chelsea.

Still, he used him sparingly when he was available. Salah started only 10 games for Chelsea – including one at Anfield, as it happens – and had been at the club only 12 months when they loaned him to Fiorentina.

“He was just a kid with a huge desire to play every week, every minute,” Mourinho has since said. “And we couldn’t give him it.”

Salah wasn’t the only one in that boat. In that same campaign, 2014-15, Chelsea sold Lukaku to Everton and offloaded a young midfielder called Kevin De Bruyne to Wolfsburg.

Incredibly, given what they have gone on to be, those three players managed only 43 appearances between them at Stamford Bridge. What might have been, eh?

Lukaku is back now, of course, and looks ready to succeed where he failed the first time around. He scored on his second ‘debut’ at Arsenal last weekend, and having cost close to £100m ($137m) from Inter, expectations are high for the 28-year-old.

There was a moment, earlier this year, when it was suggested that Chelsea were keen to bring Salah back as well, but those stories were easy to ignore.

Liverpool have no intention of letting their star man leave, let alone to a rival.

They have since opened talks over a new contract which would keep Salah at Anfield until 2025, and make him the best-paid player in Reds history.

Rightly so, too. Salah’s Liverpool record is absurd.

He has scored 126 goals in 205 games since arriving from Roma in 2017, and needs four more to complete a league century for the club. He’s already a Champions League and Premier League winner, but he won’t be settling any time soon.

“Mo is Mo; when the competition starts, he goes into the next gear,” said Jurgen Klopp after the win at Norwich earlier this month, in which Salah scored one goal and created the other two. Were it not for a tight (but correct) offside call, he’d have added to his tally against Burnley last weekend.

Chelsea beware, then. It promises to be some occasion this weekend, an early-season collision between two teams with genuine title aspirations. Anfield will be bouncing long before the first blast of referee Anthony Taylor’s whistle.

These two have shared some incredible moments in recent years. They’ve contested FA Cup finals and League Cup finals, Champions League quarters and semis, even group-stage matches. There have been slips and stunners, ‘ghost’ goals and penalty shootouts and everything in between. Games that matter, games we remember.