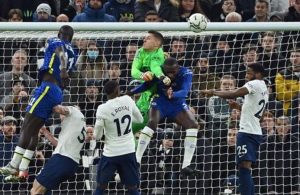 Chelsea eased into the Carabao Cup final as they closed out a comfortable semi-final win over Tottenham.

And Antonio Rudiger’s bundled finish from Mason Mount’s corner after 18 minutes effectively confirmed a Wembley date with either Arsenal or Liverpool.

It was a night of frustration for Spurs and their former Chelsea manager Antonio Conte,

as they saw two penalties, awarded by referee Andre Marriner for fouls on Pierre-Emile Hojbjerg and Lucas Moura, correctly overturned by VAR.

Harry Kane also saw a goal ruled out for offside in an improved second-half performance from Spurs.

But Chelsea always looked in control – and once they had extended their aggregate lead early on, they were able to control affairs without hitting their best form.

The game was paused late on following a medical emergency in the crowd and on resumption Chelsea completed the formalities of their victory.