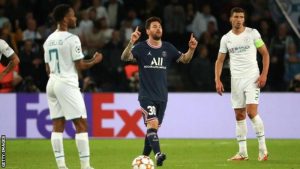 The Argentina forward Lionel Messi scored his first club goal of his entire career that had not been scored for Barcelona after sealed a 2-0 victory for PSG Against Pep Guardiola sides.

That strike ended a run of 264 minutes without a goal for Messi since his summer move from Spain.

The last goal at club level was his final Barcelona game, a 2-1 defeat at Celta Vigo in May.

Manager Mauricio Pochettino celebrated with a sense of jubilation.

Guardiola had seen Messi at close quarters enough to know it was as good as inevitable.

Messi himself was left with a huge sense of relief.

Messi expressed his feelings after the match:

“It’s true that I was getting desperate to score my first goal.”

“I hadn’t played much recently and I had only played once here at home but I am settling into the team little by little.

“The more us forwards play together, the better our relationship will be.

We all need to grow together and improve and keep giving our best.”

Former Barcelona legend had to Wait more than a month to play his first four games for his new club because of lack of fitness, international duty and then an injury.

He had failed to score in his first three fixtures for PSG.

Against Reims, Club Bruges and Lyon – after joining on a free transfer in the summer.

By his standards, that was a goal drought.

“Usually I don’t celebrate goals, I keep it to myself,” he said. “But today, for Messi, I did.

“I spent years watching Messi score goals from the opponent’s side – so this time, scoring for my team, that’s great.”

Lionel Messi glided forward from the halfway line late on against Manchester City at the Parc des Princes.

Played a one-two with Paris St-Germain team-mate Kylian Mbappe and left goalkeeper Ederson rooted to the spot with a shot beautifully placed into the top corner. 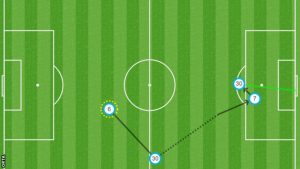 The two most expensive players ever and the record six-time Ballon d’Or winner – showed some promising signs.

They played 44 passes between each other in total, almost 10% of PSG’s total.