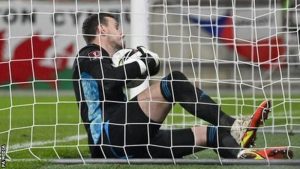 Wales boss Robert Page backs goalkeeper Danny Ward to “bounce back” as he failed to control Aaron Ramsey’s backpass and allowed it to roll into the net to give the Czechs a 2-1 lead.

Daniel James equalised for Wales, whose fans sang Ward’s name after the final whistle in a show of support.

After the final whistle in Prague by walking over to their section of the stadium to applaud the ‘Red Wall’.

“I thought it was a really nice touch from the supporters,”.

“The lads are rallying around him and, knowing him as a character, he’ll bounce back.

“Danny’s been excellent since he’s been involved.That happens unfortunately.

We know him as a person, he’s strong minded, and he’ll come back from that, no problems at all.”

The mistake was particularly unfortunate for Ward because he has played consistently well for Wales,

since replacing Wayne Hennessey as the first-choice goalkeeper.

“Danny has been terrific for us.

“These things happen from time to time.

But I’m sure there is nothing to be worried about. We’re glad he’s in goal for us.”

Wales responded well to falling behind as they controlled the remainder of the second half.

The draw keeps Wales third in Group E, trailing the Czech Republic on goal difference, but with a game in hand.

Wales’ battle with the Czech Republic for second spot – and passage to the play-offs – looks set to go down to the wire.

Wales are already all but guaranteed a play-off place thanks to their success in the Nations League.

But finishing second in this World Cup qualifying group could secure a more favourable draw in that knockout stage.

“We’re disappointed that we didn’t get the win.

I thought we thoroughly controlled the game and created some good chances.”

“We’re frustrated because we should have six points from the last two games instead of two.

“But second spot is still on. We’ve got three games left, the Czech Republic have got two. It’s in our hands.”