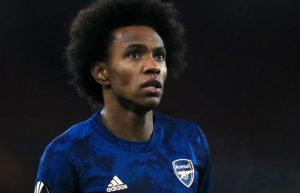 The Brazilian International has struggled to make a stand at Arsenal since joining from London rival last year.

Arsenal prepared to let the forward leave to get his wages off the books,

Brazilian club Corinthians are in talks with Arsenal over a potential deal for Willian.

The discussions taking place would be for a free transfer which would see Willian make the move back to his native country.

There remains work to be done to conclude a deal but it is understood,

all parties are hopeful an agreement can be finalised before the transfer deadline.

The 33-year-old has struggled to make an impact at The Emirates after moving across London from Chelsea last year.