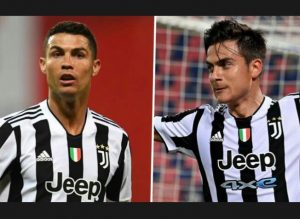 The Bianconeri boss says the Portuguese superstar is in “good condition” and expects the Argentine forward to be back to training on Tuesday
Massimiliano Allegri has delivered an optimistic update on Cristiano Ronaldo and Paulo Dybala ahead of the 2021-22 campaign, with the Juventus manager expecting his two star forwards to step up their pre-season preparations against Atalanta on Saturday.
The five-time Ballon d’Or winner saw 45 minutes of action in the Joan Gamper Trophy clash with Barcelona on Saturday, with his Argentine colleague being forced to sit that contest out as he nurses a slight knock.

The intention is to have Ronaldo and Dybala raring to go for the opening day clash with Udinese on August 22.
What has been said?
Allegri told Sky Sport Italia after seeing his side beaten 3-0 by Barca: “He [Ronaldo] is training well and in good condition. He has made himself available to the team as always.

“Then Dybala will return as well. We will arrive at August 22 in the right conditions. Dybala is fine, he’ll be back on Tuesday. He will be available on Saturday, and I think he’ll play a part in the match.”

Are Juventus expecting to make more signings?
The Serie A giants have agreed a cut-price transfer with Santos for Brazilian teenager Kaio Jorge, but other business is proving tricky.

Efforts are being made to prise Euro 2020 winner Manuel Locatelli away from Sassuolo, but Allegri insists he is not waiting on Juve to put a deal in place that will return Miralem Pjanic to Turin from Barcelona.

He added: “It’s not like I’m waiting for him, the club controls the transfer market. We have evaluated: now let’s see what happens.
“The important thing is that the team are working and ready for August 22, then if two midfielders or three defenders arrive, I don’t know.

“I have an excellent squad, [Aaron] Ramsey played a good game in front of the defence. He must improve his management of the ball. [Federico] Bernardeschi had a good attitude, there are all the right prospects for a great year.”