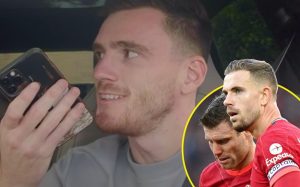 It was revealed Andy Robertson has become part of the players’ leadership team at Liverpool alongside Jordan Henderson, James Milner and Virgil van Dijk.

But it seems the left-back has got his eyes on more power having demanded to Henderson he replace Milner as Liverpool’s vice-captain!

All isn’t as it seems though as the voice note Robertson left the Reds skipper came as a result of losing a challenge to teammate Trent Alexander-Arnold.

As part of the new series of Wingmen, the pair did a Liverpool trivia quiz. Robertson lost and had to pay the price.

However, he did put together quite a good case for him being Henderson’s second in command…

“Yes Hendo… it was just regarding me trying to become the new vice-captain.

“I know Milly’s obviously there, who’s been fantastic and things but obviously me being Scotland captain and bringing on new responsibilities.

I just think maybe the time has come to, you know, up my responsibilities at this club.

“I think me and you get on quite well, we’d maybe bounce off each other so I think it might be quite a good duo.

“Yeah look, just really wanting your views on it… cheers Skip, speak to you later and hopefully I’m your new vice-captain.”

Unfortunately for Liverpool fans, this is all we can see from Robertson and Alexander-Arnold on the new series of Wingmen.

The show has expanded to a range of presenters which will see the likes of Manchester United duo Bruno Fernandes and Jesse Lingard do a show together, as will West Ham’s Michail Antonio and cult hero Adebayo Akinfenwa.