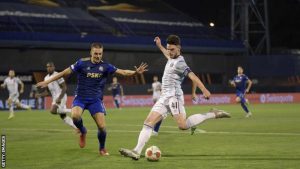 Michail Antonio set the Hammers on their way with his fifth goal of the season,

latching on to an underhit backpass from Kevin Theophile-Catherine to round home goalkeeper Dominik Livakovic and slide the ball into an empty net.

It was no more than the visitors deserved after dominating the early stages against the Croatian champions.

Declan Rice sealed an exemplary away performance with a superb second on his 150th appearance for the club.

The England midfielder brilliantly won back possession and drove into the Dinamo area,

before despatching a powerful left-foot shot through Livakovic’s legs.

Bar qualifiers, it ensured a first victory in Europe for West Ham since 1999,

and vindicated manager David Moyes’ decision to introduce several players into his starting XI for the first time this season.

Kurt Zouma and Nikola Vlasic both impressed on their full debuts for the club,

while Ryan Fredericks, Manuel Lanzini and Issa Diop all appeared up to speed on their first starts of the season.