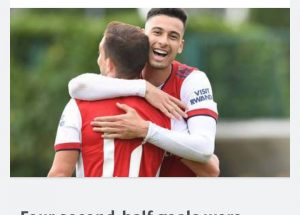 Ben White and Gabriel started in a three-man central defence, and both came through unscathed,

He latter also got his name on the scoresheet, lashing home when a clearance,

fell to him just inside the area, to break the deadlock early in the second half.

But it was Cedric who stole the show late on, scoring a well-taken brace to add some,

gloss to a valuable work-out for Mikel Arteta’s side.

Playing at left wing-back, he lobbed the keeper after breaking the offside trap with 15 minutes left, then rose well to head in Nicolas Pepe’s searching cross in the last minute.

Alexandre Lacazette had earlier scored the second, curling home a fine free-kick after Ainsley Maitland-Niles was felled just outside the box.

Read Also: Mbappe Left Out From France Duty Due To Calf Problem

Nearly all of the players who are not away on international duty were involved,

with Aaron Ramsdale enjoying a relatively quiet afternoon in goal.

Pablo Mari started with White and Gabriel either side of him in the middle of the defence,

with Calum Chambers playing the full 90 minutes at right wing-back.

though the Egyptian was withdrawn in the first half, to be replaced by youngster Charlie Patino.

The front line was made up of Gabriel Martinelli, Nicolas Pepe and Lacazette.