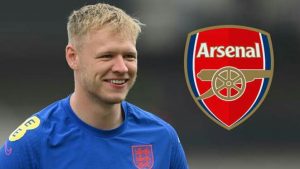 The Blades goalkeeper is arsenal target as a backup for Bernd Leno.

The news comes as something of a surprise, with talks initially thought to have broken down between the clubs due to a difference in valuation.

Now, however, it appears Mikel Arteta is set to get his man, with the Gunners originally having started their Premier League season without adequate cover and competition for Bernd Leno.

Details of the transfer

Arsenal are hopeful they can complete the deal for Ramsdale in time to register him for the squad that will face Chelsea on Sunday.

The England goalkeeper has yet to fully agree terms and carry out a medical ahead of signing an expected four-year contract, with an option for an additional year.

However, the bonuses will only be triggered if the Gunners qualify for Europe numerous times, with Ramsdale also having to make a significant amount of appearances while on the books at the Emirates.

Real Also: Lewandowski Wants To Secure A Move To Another Top European Club Before The Age Of 35.

Speaking after Sheffield United’s 4-0 defeat at West Brom on Wednesday night, which saw Ramsdale left out of the team, Blades boss Slavisa Jokanovic confirmed the keeper’s exit is imminent.

“We need to evaluate the situation,” Jokanovic said”We need to check what is best for us now, now that we have lost Aaron.

“Listen, I will repeat one more time, it’s not what I wanted. It is difficult to stop this kind of situation and it’s a huge deal for the club, after being relegated from the Premier League. From my side, he was our best option and we wanted to be working with our best players.”

Are Arsenal doing any other transfer business?

Much like their pursuit of Ramsdale, the Gunners are hoping they can get a deal for Martin Odegaard over the line in time for him to take part in the upcoming Chelsea clash.

Real Madrid are willing to accept a bid in the region of £30m ($41m) for the playmaker, who endeared himself to the Emirates faithful during a bright six-month loan last season.

It is understood that Odegaard has already arrived in London for a medical.

Arteta men are focus on their derby match against Tuchel’s side on Sunday.