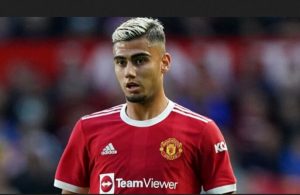 Pereira was an unused substitute as United opened their Premier League season with a 5-1 win over Leeds on Saturday.

The 25-year-old’s contract at Old Trafford runs until the summer of 2023, with United holding an option of extending it by a further year.

He spents last season at Serie A club Lazio and a move to Flamengo will be the fourth time he has been loaned out by United following spells at Granada and Valencia.

It is also understood the deal includes an option to buy at the end of the season.

Cassano Tipped Messi To Win Ballon d’Or Ahead Of Jorginho

one of the biggest in Europe, and we’re trying to see if we can achieve success with this deal,”

especially with a player of this level. We are happy to be in the hunt to get this player.”

Pereira is expected to fly to Brazil later this week.

Pereira made 40 appearances for United during the 2019/20 campaign.

But, the additions of Bruno Fernandes in January 2020 and Donny van de Beek last summer have pushed him down the pecking order.

He has played 75 games for United in total, scoring four goals and registering five assists.