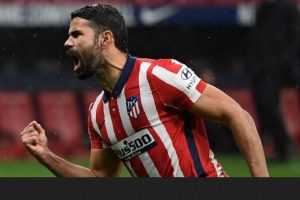 The forward left his Brazil without playing a game at senior level,

When Diego Costa was just another Brazilian teenage prospect hoping to take the football world by storm,

it is fair to say that his career did not enjoy a particularly auspicious beginning.

The future Atletico Madrid, Chelsea and Spain star moved from his hometown, the footballing backwater of Lagarto in Sergipe state, to Ibiuna, Sao Paulo at just 15 years of age to try his luck, having never played in an organised team nor received any type of formal coaching.

Staff at Barcelona Esportivo Capela, who played down in the fourth tier of the Paulista state competition,

were not wholly impressed with what they saw, offering a harsh but familiar criticism of the budding star.

“He was a very good player, but he had an explosive temper,” Robson Vasconcelos, then-sporting director of the City of Ibiuna, recalled to Jornal Cruzeiro do Sul. “He just kept getting sent off. He thought about giving up because of that, nobody wants a player like that.”

Costa, of course, ultimately did not throw in the towel and, while that fiery temperament has accompanied him throughout his career, he learned to rein it in just enough to triumph.

At Atleti, he picked up a Liga title as well as the Europa League and a Champions League runners-up medal; with Chelsea,. he added two Premier League crowns, in 2014-15 and 2016-17, becoming a cult hero at Stamford Bridge in the process.

Now, at 32, he is going back to where it all began. The uncompromising forward has signed terms with Brazilian giants Atletico Mineiro,

who look set to give him every chance to expand that already bulging trophy cabinet.

Cassano Tipped Messi To Win Ballon d’Or Ahead Of Jorginho

“There will be no lack of dedication, running and of course, goals,” Costa, who is set to be presented as a Mineiro player on Thursday, told Radio Itatiaia after his free transfer was confirmed over the weekend.

“After so many years in Europe, I dreamed of playing Brazilian football and nowhere better than here, a team with tradition../ I hope it is a blessed year full of titles.”

Costa’s typically defiant words notwithstanding, it is likely that he will need time to ease himself back into the professional game.

The ex-Spain international has not played a single game since parting company with Atletico back in December, an exit hastened by repeated injury problems and the arrival of Luis Suarez at the Wanda Metropolitano.

Nor can he expect a guaranteed place in the Mineiro line-up. Hulk, still a daunting presence for any marker at the age of 35, continues to impress as the club’s enforcer at centre-forward, his physique as magnificent and muscular as ever.

Throw former Liverpool youngster Allan and Argentine midfield duo Matias Zaracho and Ignacio Fernandez into the mix, as well as one of South America’s meanest backlines, and it becomes clear why the side has been near-unbeatable over the course of 2021.

They can clinch a place in the Copa Libertadores semi-finals on Wednesday by avoiding defeat to River Plate, with Costa expected to be watching from the stands after flying into Belo Horizonte the previous day.

But while it might take the blockbuster signing some time to get up to speed, he should have no trouble getting along with his new coach.

Cuca, who took Santos to the 2020 Copa final, is famed for his blend of iron-clad player discipline and patient, safety-first play centred on strong defence, much like Diego Simeone, Jose Mourinho and Antonio Conte – all title-winners with the striker in their ranks.

The numbers speak for themselves: Mineiro are unbeaten in their last 12 Serie A and Libertadores games, conceding just 11 times in 16 games in the league and a miserly three in their nine continental outings.

Should Cuca’s troops finish the job against River, the forward would fancy his chances of regaining full fitness in time for the last four at the end of September.

Even if that proves too ambitious a timeframe, with 22 rounds still remaining in the Brasileirao, there is plenty of scope for Costa to prove he can still compete at the top level before 2021 comes to an end.

As always with Costa, and as he has shown throughout his career, one thing is certain: if he does fall short, it will not be for lack of trying.

He conquered Spain, then England, through sheer grit, aggression and no little talent; and those same qualities mean he has every chance of a fairy-tale finish in his native Brazil.