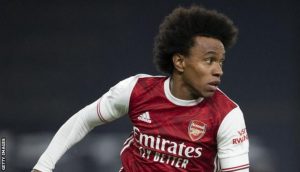 The Brazilian Midfielder contract has been  terminated by Arsenal Willian’s now prepares to join Corinthians.

Willian, 33, arrived on a free transfer in August 2020 after leaving Chelsea,

signing a three-year deal reportedly worth more than £200,000 a week.

He made 25 league appearances for Arsenal last season, scoring one goal.

The midfielder, capped 70 times by Brazil, had not featured for the club this season.

he “didn’t know” why Willian’s time at the club had not been more successful.

Willian – who won five trophies, including two Premier League titles, during his seven-year spell at Chelsea,

is set to return to his home country to join Corinthians, where he began his career before joining Shakhtar Donetsk in 2007.