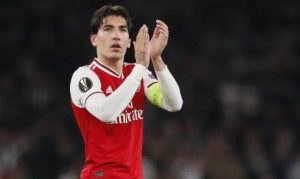 •  Manchester City are not expecting any further incomings or outgoings before the transfer window closes after tying down Brazil goalkeeper Ederson, 28, to a new contract. Portugal midfielder Bernardo Silva, 27, was the subject of an offer from AC Milan, but was not interested in the move. (Times – subscription required)

• West Ham have reached a verbal agreement with Ajax to sign left-back Nicolas Tagliafico, although completing the deal before Tuesday’s deadline will be complicated with the 28-year-old currently on international duty with Argentina. (Telegraaf – in Dutch)

However, the Hammers are unlikely to pursue a deal for Tagliafico despite the full-back having been offered to the club by multiple agents. (Athletic)

• Real Madrid have withdrawn from negotiations to sign France forward Kylian Mbappe, 22, from Paris St-Germain because the clubs cannot agree a fee.

However, the Spanish club are set to beat PSG in the race to sign 18-year-old France midfielder Eduardo Camavinga from Rennes.

• August Transfer Window 2021: All You Need To Know About Transfer Deadline Day

• Ballon d’Or 2021 Power Rankings: Is There Any Chances For Jorginho To Claims The Price?

• Chelsea have told Sevilla and France centre-back Jules Kounde’s agent they will make one last attempt to sign the 22-year-old. (ABC Sevilla, via Sport Witness)

• Leicester City have expressed interest in Chelsea and England winger Callum Hudson-Odoi, 20, who has also been linked with Borussia Dortmund. (football.london)

The Blues also want to take for Atletico Madrid’s Spanish midfielder Saul Niguez, 26, on loan but the La Liga champions want to include a clause that would make it a permanent deal for £34m. (Goal)

•  Juventus have opted not to pursue a deal for Barcelona and Bosnia-Herzegovina midfielder Miralem Pjanic, 31, with the Serie A club close to signing 19-year-old Dutchman Mohamed Ihattaren from PSV Eindhoven. Pjanic, who spent four years at Juventus before joining Barca in 2020, is one of several players the Catalan club are trying to offload before Tuesday’s deadline. (Goal)

• Brentford have made a £13m bid for Gremio‘s Brazilian full-back Vanderson, 20, who has also attracted interest from AC Milan this summer. (Goal)

• Wolves have submitted an £8.6m bid to sign Marseille and Croatia defender Duje Caleta-Car but the Ligue 1 side want £12.9m before they allow the 24-year-old to leave. (Foot01 – in French)

• Chelsea midfielder Tino Anjorin is close to joining Lokomotiv Moscow in a loan deal that includes a £17m option to buy the 19-year-old Englishman. (Goal)

• Kylian Mbappé is planning to sign a pre-contract agreement with Real Madrid in January. He knows all the biggest clubs will want him next year but he wants to sign for Madrid. [@SkyKaveh]