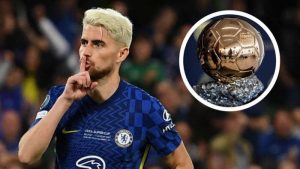 football world again eyeing the biggest individual honour the game has to offer.

The prize will not be handed out until December, meaning that players can still,

make their cases to succeed 2019 winner Lionel Messi  over the coming months,

despite most of the major club and international silverware having been won already.

So, based on performances of the contenders so far,  who holds the most power in this year’s race?

Foden is yet to get his season started as he continues his recovery from a foot injury that ruled him out of the latter stages of Euro 2020.

He could face a fight to get back into the Manchester City team too, with club-record signing Jack Grealish having made a strong start to life at the Etihad Stadium.

Pedri finally got a chance to rest over the past week after a year which has seen him play 76 matches for club and country, most of which the teenager has started.

Euro 2020’s Young Player of the Tournament now has an Olympic medal to show for his achievements, though Barcelona will hope that the midfielder’s exertions will not affect his performance level over the coming campaign.

Gundogan got off the mark for the new season with a header against Arsenal, and the Germany international will be hoping that was a sign of things to come after seeing his goals dry up towards the end of the 2020-21 campaign.

Chelsea look well set to make a push for the Premier League title this season, and Mount is likely to play a key role in being a bridge between the Blues’ midfield and attack.

Back in 2017, Neymar left Barcelona in part so he could emerge from Lionel Messi’s shadow and prove his Ballon d’Or credentials elsewhere.

That dream, however, has not become a reality, and four years on he has reunited with his close friend after the Argentine moved to PSG this summer.

So will Messi’s arrival in the French capital kill Neymar’s hopes of ever winning the Ballon d’Or? Only time will tell.

Euro 2020’s Player of the Tournament is yet to make an appearance since the final at Wembley, with Donnarumma having been made to wait for his PSG debut.

It seems inevitable that the Italy international will beat out Keylor Navas for the starting berth at Parc des Princes eventually, but it remains to be seen how loyal Mauricio Pochettino will be to his current No.1.

Defeat in the final of Euro 2020 and admitting defeat in his bid to join Manchester City – this has not been the summer Harry Kane envisaged back in May.

That said, Kane’s goalscoring ability has never been in doubt, and expect him to truly hit the ground running for Tottenham in the coming weeks, even if his exploits go a little more under the radar without Champions League football.

Dias may not have had the outstanding Euro 2020 that he would have hoped for, but normal proceedings have resumed for him at City, where Aymeric Laporte may now be becoming his favoured defensive partner.

His performances over the past 12 months have also earned him a new six-year deal at the Etihad Stadium, with the Premier League champions well aware of what a major asset they have on their hands.

After his Euro 2020 heroics, Sterling has returned to Manchester City and found that he remains on the outside looking in when it comes to being a regular starter at the Etihad Stadium.

Though he did score against Norwich City, the England star has never been less sure of his place in Pep Guardiola’s team as he is right now.

Benzema might not be the main man at Real Madrid for too much longer if Florentino Perez gets his way in the transfer market, but for now the veteran forward continues to live up to his star billing.

The France international has two goals and three assists from Madrid’s first three Liga games of the campaign as they aim to regain the title they failed to defend last season.

With Cristiano Ronaldo having left Juventus, the door is now open for someone new to become the attacking leader of the Bianconeri.

Chiesa’s performances over the past year suggest he is up to the job, though Juve’s loss to Empoli on Saturday hinted that the rebuild required at the Allianz Stadium is bigger than many people believed.

While the majority of the world’s elite players spent their summers playing major tournaments, Erling Haaland was out there, waiting, getting stronger.

The Dortmund star has returned from two months without competitive football with a bang, scoring six goals and laying on three assists in his first five games of the new campaign.

The newly-crowned Champions League Forward of the Year is showing no signs of slowing down.

Ronaldo is back at Manchester United, and while he is not the same player he was when he left Old Trafford back in 2009, there is no doubt that he can still have an impact on the Red Devils.

The Portugal international should also become the top men’s international goalscorer of all time before the year is out, meaning his place among the Ballon d’Or’s top 10 should be secure.

The middle third of De Bruyne’s 2021 has been dominated by injuries, with both the Champions League final and Euro 2020 ending with the Belgian playmaker facing fitness problems.

There remains no doubt that the Man City schemer is the best playmaking midfielder in the world right now, but De Bruyne will hope that this current run of bad luck does not stretch too far into the new campaign.

Speculation over Mbappe’s future looks likely to dominate the final days of the transfer window, but on the pitch he is showing no signs of feeling the pressure.

The France international has three goals and two assists in PSG’s first four Ligue 1 games of the season, and though they could yet be his last for Les Parisiens, he at least would be going out on a relative high.

Lukaku’s return to Chelsea looks like a match made in heaven for the Belgium international, with the Blues believing they have found the missing piece to Thomas Tuchel’s jigsaw.

His goal against Arsenal on his second debut was a perfect illustration of what Lukaku is about at this stage of his career, and few would bet against him winning the Golden Boot this season.

After being named Man of the Match on four occasions during the knockout stages of the Champions League – including in both semi-final legs and the final – Kante was the rightful winner of the competition’s Midfielder of the Year award.

Niggling injury concerns are a worry heading into the new season, but Kante has already done plenty to ensure he will remain in the Ballon d’Or conversation all the way through to December.

If anyone was still doubting whether Jorginho was a genuine Ballon d’Or contender before, then the Chelsea midfielder winning UEFA’s Player of the Year prize is a sure sign that he will be in contention for the biggest individual prize of them all too.

As this column has explained previously, ‘Modric’s Law’ is a real thing when it comes to end-of-year awards, and there is no one better placed to take advantage in 2021 than Jorginho.

Lewandowski is not about to give up on claiming the prize he should have won in 2020 without a fight after making a fast start to the new season at Bayern Munich.

The Poland international has netted seven goals in four games for the Bavarians thus far, and should have brought up a half-century of goals for the year by the end of September if his form holds.

Despite him moving clubs, the Ballon d’Or remains Messi’s to lose in 2021, with his role in Argentina’s Copa America triumph currently the deciding factor.

The fact that PSG have been drawn into the most intriguing Champions League group means he will remain in the spotlight through the final months of the year, while playing for the dominant side in Ligue 1 should offer him opportunity to stack up the