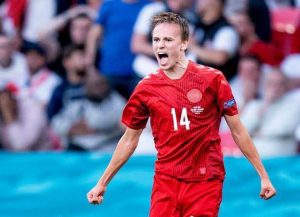 but Tottenham have dropped out of the race for the 21-year-old, who starred for his country at Euro 2020. (La Repubblica via Sport Witness)

Paris St-Germain are yet to respond to Real Madrid‘s offer for France forward Kylian Mbappe, 22, with the La Liga club having set a Monday deadline for the Ligue 1 side to accept or reject their approach. (Marca)

Sevilla will not accept an offer of less than 80m euros (£68.5m) for France defender Jules Kounde. Chelsea have been linked with a move for the 22-year-old after selling his international team-mate Kurt Zouma, 26, to West Ham. (Marca – in Spanish)

Read Also:• Pochettino hails Mbappe: ‘It’s A Gift To Have Him’

Aston Villa are preparing a £15m offer for Liverpool and England Under-21 midfielder Curtis Jones, 20, who is yet to feature for the Reds this season. (Sun)

Tottenham are looking to sign two more players before the end of the transfer deadline with Barcelona right-back Emerson Royal, 22, top of the list. (Express)

Everton, Brighton, Leeds and Crystal Palace are all in the race to sign Manchester United and Wales winger Daniel James, 23, who is free to leave Old Trafford with 36-year-old Portugal forward Cristiano Ronaldo set to arrive from Juventus. (Star)

Manchester United winger Amad Diallo’s potential loan deal to Feyenoord looks to be off after the 19-year-old suffered an injury. (AD via Goal)

Everton are in talks over a deal to sign Venezuela striker Salomon Rondon from Chinese side Dalian Professional. Toffees boss Rafael Benitez managed the 31-year-old in China and at Newcastle. (Sky Sports)

Watford are in talks with Birmingham over selling 33-year-old club captain Troy Deeney to the Championship side. (Athletic – subscription required)

Torino are lining up a loan move for Leicester and Belgium midfielder Dennis Praet, 27, who has not featured for the Foxes this season. (Tuttomercatoweb, via Sport Witness)

The Serie A club may also make a move for Paris St-Germain‘s Argentine striker Mauro Icardi, 28, who scored 124 goals in 219 games in a six-year spell for Juve‘s rivals Inter Milan. (Tuttosport – in Italian)