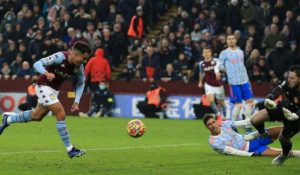 Philippe Coutinho scored on his Aston Villa debut to complete a late comeback and earn Steven Gerrard’s side a point at home to Manchester United at Villa Park.

A Bruno Fernandes double had given United a 2-0 lead midway through the second half.

The draw leaves Man Utd six points off the top four but steadies the ship for Villa who have been looking for results to match their performance.