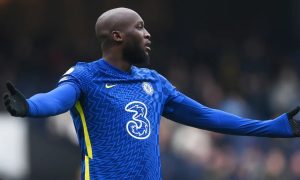 Chelsea manager Thomas Tuchel has warned Romelu Lukaku that he cannot complain about a lack of service from his teammates as he must create opportunities for them as well.

Lukaku is yet to set the world on fire since his £97.5m return to Chelsea.

Having scored just five Premier League goals all season, and he drew an emphatic blank on Saturday as his Blues were bested 1-0 by Manchester City.

During the game, Lukaku spurned a handful of nice chances but generally cut an isolated figure up top, looking frustrated with the lack of service into him.

However, Tuchel warned him that he must get more involved in the game and be more effective when he does get the ball if he wants to see things improve.

“Lukaku sometimes needs to do the service, he is included in this, he had many ball losses in very promising circumstances, he had a huge chance.”

“Of course we want to serve him, but he is part of the team, and the performance up front, we can do much better.”

“We had eight or nine transition chances but we didn’t get a touch in the box.

The decision making and timing was not what we need at this level of football.”

Tuchel, who believed Chelsea deserved a draw from the game, confessed that his players simply did not match up to their City counterparts.

“I think we lost on individual performance and on one situation today.”

“In terms of attitude, commitment, defensive-wise, I am happy.

“We did not allow too many big chances, kept them to a minimum and we were aware and active with our defending.”