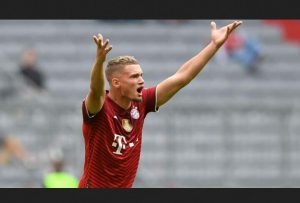 Michael Cuisance injured Sven Ulreich in training, with the goalkeeper now set to spend the next two months on the sidelines.

Cuisance has struggled to establish himself in Bayern’s first team since joining the club,

from Borussia Monchengladbach in 2019, making just 12 appearances across all competitions.

The 22-year-old spent the 2020-21 campaign on loan at Marseille, who decided against signing him permanently.

He is now back at Allianz Arena trying to force his way into Julian Nagelsmann’s plans.

But, did his chances some harm after a clash with Ulreich on Monday.

Read Also: Per Mertesacker Reveals How Long It Will Takes Arsenal Before They Could Back On Champions League

Bayern’s back-up goalkeeper was forced to withdraw from training after being caught by Cuisance.

Who hit his team-mate hard in the knee with his studs up.

Ulreich was heard screaming in pain after the challenge and had to be driven off the pitch.

The Frenchman was involved in a similar incident last week.

As he reportedly struck summer Marcel Sabitzer in the upper arm during a practice session.

And there are reports that Bayern are now losing patience with him.