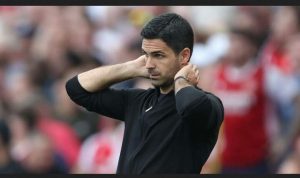 Mertesacker admits a return to elite European football may still be a few years away.

The former Gunners defender, who is now head of the club’s academy believes Arsenal,

may still out of Champions League for another “two or three years”, but he has urged patience with Mikel Arteta.

Gunners have failed to qualify for elite European competition since Arsene Wenger was still at the helm,

Mikel Arteta is the man charged with the task of reversing that trend.

And despite questions being asked of the Spaniard’s ability to deliver on lofty expectations.

Mertesacker insists he is the right man for the job.

‘of the current state of affairs at Emirates Stadium’

“Massive transition, that’s what I would class it as.

I think it was clear when Arsene left the void that needed to be filled wouldn’t get sorted in a couple of seasons, or three to four years.

“You always want the shortcut, you know, bang straight back into the Champions League.

straight back into being successful. I think even myself, realising and working now with the academy.

Going more long-term developmental, I think we see kind of similar-ish traits in the first team.

And I hope that Mikel gets the time that he needs.”

“I want to be successful tomorrow, I want to go back in the Champions League tomorrow.

And i want to speak to people and say ‘listen, we have got the best club in the world,

who challenges for titles every single year’. That’s not the reality.

I think the earlier we get on the train of we are in a big, big transition still [the better].

“To have sustainable success there needs to be some trust.

I’m all for trusting people in people. If Mikel Arteta, and I perceive him to be the right person,

let’s give him the trust and the development squad that he can take to the next level that will achieve Champions League football, maybe in two or three years.