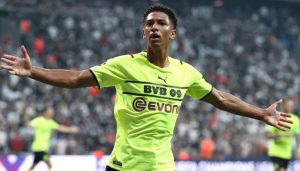 The England international surpassed a record held by Kylian Mbappe by scoring in Borussia Dortmund’s Champions League win over Besiktas on Wednesday.

Bellingham opened the scoring before providing an assist for Erling Haaland,

just before half-time as the Bundesliga outfit held on for a 2-1 victory.

With his goal, Bellingham became the youngest-ever player to score in consecutive Champions League appearances.

The midfielder opened the scoring for Dortmund in the first half,

before City stormed back with two goals in an eventual 4-2 aggregate win.

By scoring against Besiktas in Dortmund’s 2021-22 Champions League opener,

Bellingham became the youngest-ever Englishman to score an away goal in the Champions League.