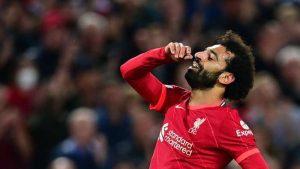 Mohamed Salah equalled Steven Gerrard’s Liverpool record for most Champions League/European Cup goals at Anfield with his strike against AC Milan on Wednesday.

Salah netted in the 48th minute of the Champions League encounter, levelling the match at 2-2 after finishing an assist from Divock Origi.

The goal was Salah’s 14th in the Champions League at Anfield, going level with Reds legend Gerrard.

Salah had scored just three Champions League goals in his career before moving to Liverpool from Roma, but he’s since become a serial scorer in the competition.

The Egypt star now has 26 Champions League goals for Liverpool,

with more than half of those coming at home.

One of his most memorable tallies came away from Anfield.

He opened the scoring in the 2019 Champions League final against Tottenham with a penalty in the second minute.

With Liverpool already up 1-0 in the 14th minute, Salah saw his penalty saved by Milan keeper Mike Maignan.

It was just the second time Salah has failed to convert from the spot in 19 Liverpool attempts, and the first time since 2017.

2 – Mohamed Salah has failed to convert a penalty for just the second time in 19 attempts for Liverpool, with this his first since failing to score versus Huddersfield in October 2017. Rarity.