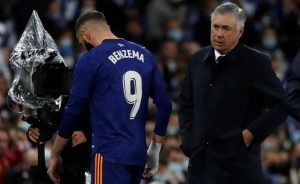 The France International Karim Benzema was replaced in the 17th minute of Real Madrid’s game away at Real Sociedad due to a muscle injury and could miss out on Los Blancos’ key games against Inter and Atletico Madrid next Tuesday and Sunday respectively.

Except for a miracle, Benzema will not be at Carlo Ancelotti’s disposal for the midweek duel that will decide the team which finishes top in Group D in the Champions League.

After Tuesday’s match against the Nerazzurri, Real Madrid will host city rivals Atletico Madrid, who lost to Real Mallorca on home soil earlier on Saturday.

Benzema realised that he had picked up a hamstring injury while running without the ball, which led to him testing his left leg, but 20 seconds later he fell to the ground and asked to be replaced, with Luka Jovic coming on without warming up.

The France international has participated in all his national team’s games so far this season.

He has also started in 18 of Real Madrid’s 19 duels, playing the full 90 minutes in 14 encounters.

Meanwhile, no player in Europe’s top five leagues has participated in more goals than Benzema (12 goals and seven assists), who is the top scorer in LaLiga Santander.