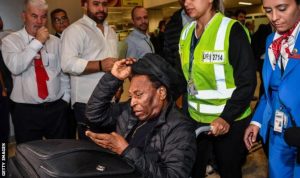 The 80-year-old was admitted to hospital after a tumour in his right colon was discovered in tests.

Brazil legend Pele says he is “recovering well” following surgery to remove a tumour from his colon.

He posted on social media on Monday confirming he had had surgery to remove the “suspicious lesion”.

Before his surgery, the three-time World Cup winner said:

“I will face this match with a smile on my face, a lot of optimism and joy for living.”

following the surgery, but dedicated his post to “good friend” and singer Roberto Carlos,

who lost his 52-year-old son to cancer on Wednesday.

Pele is Brazil’s all-time leading goalscorer and one of only four players to have scored in four World Cup tournaments.