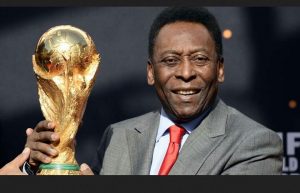 Brazil icon Pele says his recovery from an operation is going well.

The 80-year-old went under the knife to remove a tumour from his colon last week.

The three-time World Cup winner was admitted to the Albert Einstein hospital,

in Sao Paulo at the end of August after the tumour was discovered during routine examinations.

Pele took to social media to thank fans for the well wishes he has received and says,

he will spend the coming days focused on his recovery.

“My friends, with each passing day I feel a little better. I’m looking forward to playing again,

but I’m still going to recover for a few more days,”

“While I’m here, I take the opportunity to talk a lot with my family and to rest.

“Thanks again for all the loving messages. We’ll be together again soon!”

The Sao Paulo hospital confirmed that the football legend

“has been recovering satisfactorily, is conscious, actively talking and maintaining his vital signs in normality”.

But Pele is to be kept in intensive care for the time being.

and has been forced to use walkers and wheelchairs since he had a hip replacement in 2012.