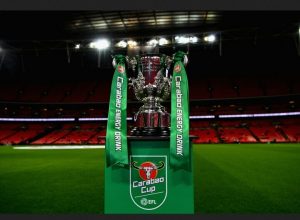 The quarter-final draw for the Carabao Cup has been confirmed, with two London derbies pulled out of the hat.

There will be a new name on the trophy for the first time in five years after holders,

Manchester City were knocked out by West Ham in the fourth round.

Seven of the remaining eight teams belong to the Premier League, while League One Sunderland also reached the quarter-final stage.

Chelsea and Liverpool are the overwhelming favourites to win the competition.
While Arsenal and Tottenham will also entertain hopes of silverware.

Top-flight sides Brentford, Leicester and West Ham will all fancy their chances as Man City’s exit offers fresh hope of an unlikely winner.

Read Also‘No One Is Undroppable, Of Course They’re Not’. Solskjaer Issues Warning To His Star Players.

The grudge match between Spurs and West Ham is the pick of the quarter-final ties, especially in light of the two clubs’ recent form.

West Ham are currently above Tottenham in the table, after finishing ahead of their rivals last season, and Gabby Agbonlahor even claimed the Hammers are now a bigger club.

“Apart from Chelsea, they’re the biggest club in London,” the Aston Villa legend said on Friday.