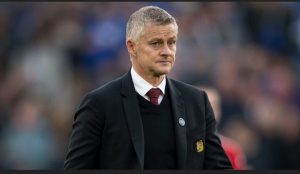 United’s 29-game unbeaten run away from home in the Premier League was brought to a crashing halt at Leicester.

The Foxes coming from behind to win 4-2 at the King Power Stadium.

Solskjaer’s side are winless in their last three league games.

Pressure further growing on the manager after an expensive summer of incomings.

Solskjaer had done well at United but “he knows himself, as does every Manchester United fan.

That he is not at the same level as the other managers at the top of the Premier League”.

However, Solskjaer hinted Sky Sports pundit Carragher’s comments were made with United‘s Sky Live showdown with Liverpool on Sunday at Old Trafford in mind.

“No it doesn’t affect me,” he said ahead of United’s Champions League match against Atalanta on Wednesday.

“Of course you see comments once in a while, I didn’t know what he was saying now.

“Of course we have got Liverpool on Sunday as well, so Jamie is always looking at these little things.

“I believe in myself and as long as the club believes in me,

I am pretty sure Jamie Carragher’s opinion is not going to change that.”

Solskjaer also took the media to task, after his comment Marcus Rashford

“maybe he needs to prioritise his football” was reported last week.

Rashford, who is fit again after injury, has been praised for his campaigning to end food poverty for children.

He joined Solskjaer at Tuesday’s press briefing and the manager said:

“Let’s get the elephant out of the room straight away.

“You know the headlines, that came after the chat I had before the Leicester game.

“Of course, we are so unbelievably proud of what Marcus has done on and off the pitch.

“And now, you know what I said, and you made a headline out of one little comment I never intended to be the focus of what I was saying.

“I was saying that it must be nice for Marcus to focus on going into training.

And not feeling his ankle, his shoulder or his back, he can just go and enjoy his football.

“And I think you all know that.”