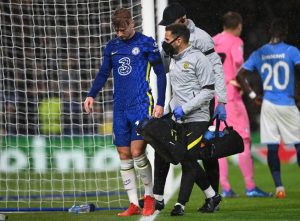 Premier League leaders Chelsea take on bottom club Norwich on Saturday lunchtime but are dealing with a striker crisis with both Romelu Lukaku and Timo Werner set to miss out.

The Blues breezed to a dominant 4-0 victory over Malmo on Wednesday.

But it was a bittersweet win as both forwards were forced off before half-time.

Chelsea’s return to league action against winless Norwich is now a much sterner test without Lukaku and Werner.

This Premier League clash will kick-off at 12:30pm on Saturday, October 23

Thomas Tuchel’s side are just one point clear of second placed Liverpool while the Canaries have claimed just two points so far this season.

Read Also: Chiellini: ‘It Would’ve Been Better If Ronaldo Had Left Earlier’.

Thomas Tuchel has called on Chelsea’s out-of-favour attackers to seize their chance after Lukaku and Werner both suffered injuries in mid-week. 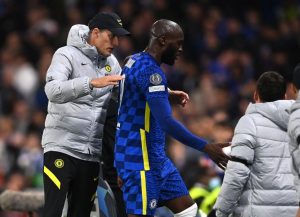 “Guys who waited for their chance need to step up and prove what they can do.

“The race is on and the guys who will start against Norwich in the next game have our trust and we will have our solutions.

Christian Pulisic remains the only other absentee for Chelsea as he continues his recovery from an on-going ankle issue.

Norwich meanwhile have no fresh injury concerns with Christoph Zimmermann still on the sidelines with his own ankle problem.

• Chelsea have won 10 of their last 12 Premier League games against Norwich (D2).

Norwich have taken just one point from their subsequent seven trips to Stamford Bridge (D1 L6).

• Norwich have lost each of their last 10 Premier League matches in London.

Last earning points from such a fixture with a 2-2 draw against West Ham in September 2015.

Chelsea themselves have beaten the side bottom of the table more often than any other team since the competition was formed in 1992 (42).

• Excluding MD1 matches, this will be Norwich’s 38th consecutive Premier League game in the relegation zone.

• Norwich are winless in their last 16 Premier League away games (D3 L13), netting just four goals in that run.

The Canaries are without a goal in their last 10 hours and 26 minutes of play on the road in the competition, since Emi Buendía netted against Watford in July 2020.

• No side has conceded fewer goals than Chelsea in the Premier League this season (3).

While Norwich have the worst attack so far (2 goals scored).

However, the Canaries are looking to keep three consecutive Premier League clean sheets for the first time since November 2012.

The third game of which was a 1-0 victory against league leaders Manchester United.

• Of all goalkeepers with at least 10 starts in Premier League history, Chelsea’s Édouard Mendy has the highest clean sheet ratio.

The Senegalese ‘keeper made six second half saves in the Blues’ 1-0 win at Brentford last time out.

• Ben Chilwell has scored in each of his last three Premier League appearances for Chelsea.

Having scored just twice in his first 26 appearances for the club in the competition.

Averaging four shots per 90 minutes in these games.

Since then, the Belgian has gone four games without a goal, averaging just 1.6 shots per 90 in this time.