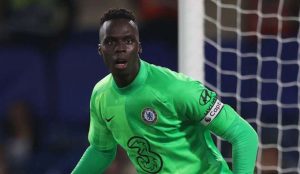 Edouard Mendy has explained how he has managed to keep his starting position since he signed for the team one year ago.

The 29-year-old Senegalese custodian arrived at Stamford Bridge from Rennes in France,

while the team was led by Frank Lampard, and he went on to claim the starting role between the sticks which he has kept under new manager Thomas Tuchel.

Mendy, who has managed to keep clean sheets in 29 of his 50 games so far in a Blues shirt.

He won the Champions League in May and  was handed the trophy for Uefa Men’s Goalkeeper of the Year for 2020-21.

Ahead of Chelsea’s trip to face Tottenham Hotspur in a London derby on Sunday.

Mendy has revealed how he has managed to keep the position as first choice,

his opinion on the return of fans and the team’s good performances under Tuchel.

“When you play for this kind of club, you will find big competition [for places], a big fight for playing,”

“You can see it at Manchester City and at Liverpool – two good goalkeepers who are ready to play.

So you have to be the best for yourself

but, for the team also because when the coach puts you on the pitch, you have to show why he called you.

It’s competition and Kepa [Arrizabalaga], me or Marcus [Bettinelli], we want to be the best for the team.”

On the return of fans to watch matches, Mendy said:

“Last year we didn’t play in front of the fans but now with the situation we are lucky.

We can play in full stadiums and it is quite an atmosphere at Stamford Bridge.

“The fans are incredible and they help me a lot.

When I watched the games when I played in France, every time I said to myself – ‘Wow! The atmosphere in England, especially in Chelsea, is incredible.

“So now I’m lucky because I play with this atmosphere.

And, this year for the Premier League, for the Champions League, and the cups, we need it.”

On why the team has managed to thrive under Tuchel, Mendy revealed:

“When the manager arrived he brought his philosophy and his energy and we performed straightaway.

“I think it was a good match between the manager and his staff and the team.

Because, the way he wants to play, we have the players for it so it was a good match.

“For me, he brings a lot of energy. He is a very energetic manager and I think the team needs that so it’s good.”