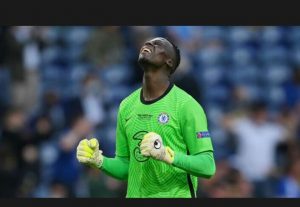 The chel first choice goalkeeper becomes the first African goalkeeper to play in the competition’s final since 1985.
Edouard Mendy has set a Uefa Super Cup record having made Chelsea’s starting XI for Wednesday’s game against Villarreal.
With that, he is the first African keeper to play in the final since Bruce Grobbelaar versus Juventus in 1985.
The Super Cup is an annual football match contested by the champions of the continent’s two main club competitions – the Champions League and the Europa League.