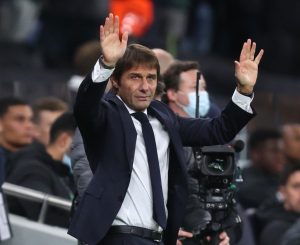 Antonio Conte will take charge of his first Premier League game as Tottenham boss this weekend when he takes his side to Everton.

Conte got his Spurs tenure off the mark with a victory on Thursday when they beat Vitesse in a 3-2 thriller in the Europa Conference League.

Now, it will get serious for Conte as Tottenham, who were hammered by Manchester United last weekend, travel to Merseyside in the league.

Everton started the season well but have since lost three in a row including a loss at Wolves last time out.

It will take place at Goodison with a kick-off time of 2pm.

Everton defender Lucas Digne remains a doubt with a muscle injury while Yerry Mina and Andre Gomes will both need fitness tests.

Abdoulaye Doucoure and Dominic Calvert-Lewin will remain out until at least the end of the month.

Tottenham have no major issues ahead of Conte’s first Premier League team selection.

Bryan Gil could return to the squad but Ryan Sessegnon remains out.

This is the only aspect that, not I’m afraid, but I’d like to have time to work.

“This time and I, we need to work together to bring them my idea of football and to work tactical aspects, physical aspects, to know them, much better than now.

“This is the only aspect that I am a bit scared, a bit afraid.

But I know that there is this type of situation, and for this reason, we need a bit of patience.

“And I know that I have to be patient. Because is a situation that we don’t have too much time to work.

“For sure, this club has great potential. I was enthusiastic about the stadium, about the training ground, maybe in the world I don’t know if another club has this.

“I think it was one of the reasons I accepted them to come here.

Because I know that here, I can work in the way that I like.

“And the club is a top club. And I want to repay the club. About the trust that they showed me.

And for sure now in this moment, we have to focus on the pitch, on the football aspect.

“To try to bring at the same level is very difficult. I think the club with the stadium, with the training ground is for me the best in the world maybe.