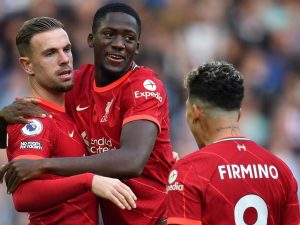 Liverpool face a tough task to return to winning ways in the Premier League when they travel to east London to face West Ham this weekend.

Jurgen Klopp’s side lost ground on table-toppers Chelsea after throwing away a two-goal lead at Anfield to draw against Brighton last Saturday.

The Reds bounced back with a dominant 2-0 win over Atletico Madrid in midweek but they face a tough test at David Moyes’ in-form Hammers.

West Ham are up to fourth following a three-match win streak and the Irons haven’t tasted defeat since a 2-1 loss to Brentford at the start of October.

It will take place at the London Stadium with a kick-off time of 4:30pm.

Liverpool won 3-1 on their last trip to West Ham in January, with a double from Mohamed Salah helping the away side to all three points.

The hosts have no major issues to contend with Vladimir Coufal making his first start since returning from injury in the 2-2 draw at Genk.

Liverpool meanwhile are struggling with a number of fitness issues with Roberto Firmino suffering a hamstring problem against Atletico Madrid.

Both Naby Keita and James Milner were already in the Reds’ treatment room with similar injuries and all three are unlikely to feature against West Ham.

Joe Gomez picked up a calf problem in midweek and is a doubt while Curtis Jones may be sidelined with an eye issue he sustained in training.

Liverpool’s long-term absentee Harvey Elliott is still recovering from the dislocated ankle he suffered back in September.