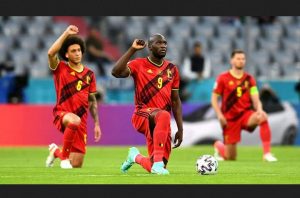 The Belgium forward wants way to  deal with discrimination from sport and society and has called for more meetings.

Romel Lukaku joined his team-mate Marcos Alonso in questioning the ongoing impact of taking a knee in professional football.

Efforts continue to be made when it comes to eradicating all forms of discrimination from sport and wider society.

But Lukaku concedes that actions on the field are not having the desired impact,

and more needs to be done by those in positions of power.

Former Inter striker is prepared to lead an ongoing “fight”.

And he is looking for major players in the world of social media, politics and sport,

to sit down and thrash out suitable plans for a more inclusive future.

Lukaku on how to eradicate it.

should have a meeting with the CEOs of Instagram and governments and the FA and the PFA.

And we should just sit around the table and have a big meeting about it.

“How we can attack it straight away, not only from the men’s game.

But also from the women’s game. I think just all of us together and just have a big meeting.

Have a conference and just talk about stuff that needs to be addressed to protect the players.

But also to protect fans and younger players that want to become professional footballers.

“I have to fight, because I’m not fighting only for myself.

I’m fighting for my son, for my future kids, for my brother, for all of the other players and their kids, you know, for everybody.

“At the end of the day, football should be an enjoyable game.

You cannot kill the game by discrimination.

That should never happen. Football is joy, it’s happiness.

It shouldn’t be a place where you feel unsafe because of the opinion from some uneducated people.”