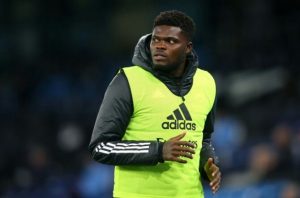 The Ghana international has endured a frustrating start to the season, missing the first months with an ankle injury he picked up in pre-season.

He made his first appearance of the new campaign against Norwich City, coming off the bench during the win over Norwich City.

A week later, Mikel Arteta opted to start Partey in the centre of Arsenal ’s midfield,

as they made it back-to-back 1-0 wins in thePremier League, beating Burnley at Turf Moor.

However, he was withdrawn in the closing stages against the Clarets due to cramp, as he slowly builds up his match fitness.

It was therefore a huge surprise to see the former Atletico Madrid man in the starting XI for the cup game against the Dons.

Many expected him to sit out in midweek.

With one eye on the North London derby with Tottenham on Sunday.

The decision to start him was met with condemnation on social media.

But, Football.London claim it was only made after Partey himself asked to be involved.

Read Also: ‘Everybody’s Clapping But After The Game You See Another Insult’ Lukaku.

After such a stop-start period, he is desperate to fine-tune his fitness.

Particularly with that huge clash against Spurs on the horizon.

Arteta was full of praise for his showing at Turf Moor.

He was deployed in a deeper lying midfield role, anchoring an otherwise youthful side.

“He’s really important because he is the anchor,”

“He is the one that needs to read what is happening and make the rest better.

“How he managed the transitions was top.

He has the pressing and the charisma and then he struggled at the end.

And he could not finish the game because he was cramping. But that will come up.

“He missed a long time but now he’s back again and he needs some more fitness back.”

And Partey got another 60 minutes in the bank ahead of Spurs and was taken off exactly on the hour mark, a clear sign of a plan between manager and player.