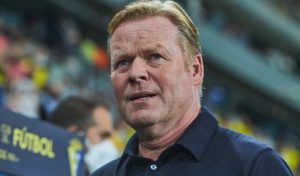 Frenkie de Jong’s red card saw the visitors play the last 25 minutes with 10 men, with Koeman dismissed in the dying seconds for dissent.

But it could have been worse for a visiting side lacking any creativity, a

after the break led to Cadiz creating numerous late chances to win the game, having defended deep for the majority.

Alvaro Negredo, Salvi Sanchez and Anthony Lozano were all denied by Ter Stegen.

While at the other end Depay was guilty of squandering several good opportunities for a Barcelona side lacking in quality but full of fight.

The frustration got the better of Koeman in injury time as he was sent from the sidelines for arguing against a late booking for Sergio Busquets.

Koeman after the match talk to La Liga TV.

“One of the problems is in Spain they send you off for nothing.”

“They don’t say why, they just say attitude.

Everyone saw the moment there was a second ball on the pitch. Everyone has to see that.

“I am strong of course. I can’t win the battle with the press.

I will put my energy into the team and with the players.

But, I still see a fantastic attitude of the players and for me that is most important.

I can’t stop what the press are writing. We have to continue, that is my job.”

The pressure is building on Koeman after a start to the season.

Which has seen the Catalan giants draw three of their first five league games.

The former Barcelona midfielder has not been helped by the club’s perilous financial position.

Which saw Lionel Messi exit the club in the summer and has left the manager with a young and inexperienced squad.

Though, with speculation growing that replacements are being considered.

“Here we have to try and win La Liga. This notion of ‘it’s OK to finish in the top four’ doesn’t work for me.

“We’ve got a squad who can fight for the La Liga title.

I don’t think other sides have better squads than us. We need to get into gear and start winning.”

“When I said ‘it is what it is’, it’s because we’ve got four absentees up top.

“I also said we’d end up competing. I’m not wearing the Barca shirt to come second or third.

I’m here to win titles and I’m absolutely convinced, despite the start we’ve made, we’ll compete. We need the fans to stay with us.”