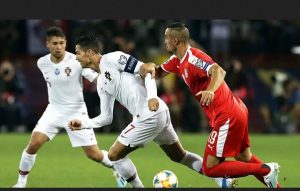 As we head into the final stretch of qualifying for the 2022 Qatar World Cup, there is still plenty to play for, with some exciting fixtures to look forward to.

Here comes a look at the five best European qualifiers you can enjoy this weekend.

Spain host Sweden in Seville on Sunday in what will be the deciding fixture in UEFA’s Group B.

Luis Enrique’s side come into this one off the back of a 1-0 victory over Greece during the week.

While Sweden suffered a shock 2-0 defeat to Georgia. Spain will top the group and achieve automatic promotion if they avoid defeat here.

Both sides are level on 17 points in Group A as they go into the deciding match.

Portugal drew 0-0 with the Republic of Ireland in their last fixture and will gain automatic promotion if they avoid defeat against the Serbs.

Gareth Bale’s Wales side are still in with a chance of automatic qualification in Group E.

A victory over bottom side Belarus and over top side Belgium would see them top the group if the Belgians drop points against Estonia.

Wales can leapfrog the Czech Republic in second if they win this game in hand.

Although defeat in their final match would see it go down to goal difference if the Czechs defeat Estonia.

It’s a straight shootout in Group H on Sunday as the two top sides face each other in Split, with the victor claiming automatic qualification.

Both sides will be high on confidence after results on Thursday, with Russia hammering Cyprus 6-0 and Croatia dismantling Malta 7-1.

Memphis Depay’s Netherlands could find themselves in second place going into this game if Norway win against Latvia in the earlier kick off.

A victory for Louis Van Gaal’s team would seal automatic qualification for next year’s tournament, though.