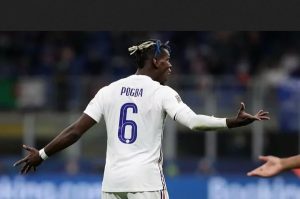 The french star Paul Pogba talent is undoubted and he is now at the stage in his career where he is looking to sign his last big contract.

His trajectory may have taken a blow, however, after suffering what looks like a thigh injury during a training drill with the France national team.

This is the midfielder’s third injury in two years and comes at a bad time as he looks to secure another big deal.

The Manchester United man is expected to return to the pitch in January.

By which time he’ll have to have made some decisions, with his contract at the Premier League side running out in June of next year.

He will be a free agent next summer if he doesn’t sign a new deal at Old Trafford and this injury may be what finally convinces him that his time in Manchester is over.

He was also set to serve a three-match ban after being sent off in United’s 5-0 home defeat to Liverpool in the Premier League, which prompted United legend Paul Scholes to share a scathing opinion on the Frenchman.

“It has created havoc in recent years,” said Scholes.

“Everyone knows what talent he has, all the coaches believe in him and everyone has allowed him to be the player he was.

“He didn’t sign a new contract, so he almost holds the club hostage and now he has.”

Real Madrid waiting in the wings

Real Madrid will be keeping an eye on Pobga’s situation, as they have been interested in him for a while.

He is seen as a ready replacement for some in the squad who are getting on in years.

And Los Blancos will be watching what he and his agent Mino Raiola do in the coming months.

Pogba has also, though, been linked with a move to Paris Saint-Germain, as well as his old club Juventus.