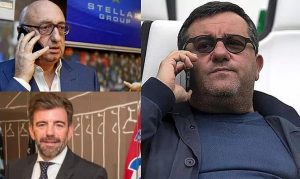 There were 17,945 transfers involving professional players in FIFA’s transfer management system, with 3,545, almost 20 percent, involving at least one agent.

European clubs counted for 95.8 percent of the 452 million euros spent on commission for agents, with English clubs leading spending at 117.96 million, followed by Germany (74.77 million), Italy (65 million), Spain (30.8 million), France and Portugal (26 million each), a study published by FIFA on Wednesday has revealed.

The total transfer spending of clubs fell for a second consecutive year, by 13.9 percent compared to 2020, but agent fees rose by 0.7 percent.

According to FIFA’s report, Intermediaries in International Transfers, more than 3.1 billion euros has been spent on agents in the last decade.

1,287 professional players transferred
Among those nearly 18,000 transfers, 1,287 were international deals with 300 involving an agent.

Reform of the transfer system

Since 2017, FIFA has been working in making the transfer system fairer and more transparent.

Plans involve capping agent fees and managing them through a ‘clearing house’.

New rules on agents are set to come into force in 2022, though agents like Mino Raiola, Jonathan Barnett and Pedro Bravo have voiced their opposition.