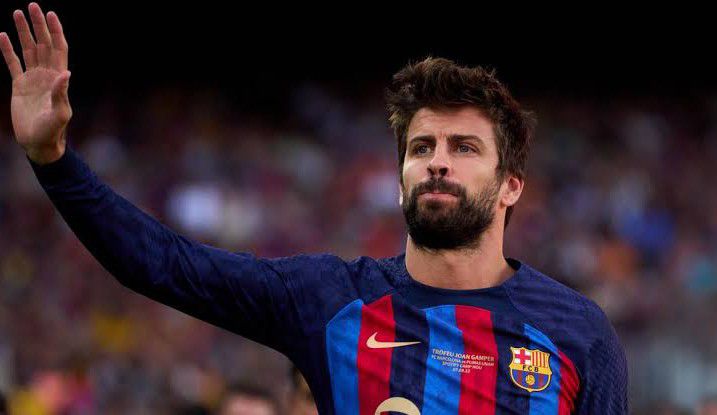 Gerard Pique has announced his retirement from professional football.

The spaniard who won multiple honours with Barcelona, as well as the 2010 World Cup with the national team Spain, has been out of favour this season under Xavi Hernandez.

In a statement he confirmed that Saturday’s La Liga game against Almeria will be his last.

The 35-year-old had been a near-constant fixture in Barcelona’s starting line-up after joining from Manchester United in 2008, but in recent years had started to suffer from regular injuries.

In this season he has made only five league starts and nine in total, with four coming in a

disappointing Champions League campaign which has seen the side fail to qualify for the knockout stages.

The arrival of players such as Eric Garcia and Ronald Araujo have forced him down the pecking order at the Camp Nou.

Pique made his professional debut for Manchester United in the 2004 season after joining as a teenager from Barcelona.

He spent the 2006/7 season on loan at Real Zaragoza and left to return to his boyhood club,

with Nemanja Vidic and Rio Ferdinand offering him little chance of regular football under Alex Ferguson.

“From a very young age, I did not want to become a football player, I wanted to play for Barca.”

“I have been thinking a lot about that kid lately, about what little Gerard would have thought had all his dreams come true.

That he would become a European champion and world champion.

That he would play alongside some of the best players in history, and captain the club and make friends for life.

“It has been 25 years since I joined Barca, I left and I came back.

Football has given me everything. I have always said that I would not be in any other team after I left Barca, and that is how it will be.

“This Saturday’s game will be my last at Camp Nou.

I will become a regular fan. I will support the team.

I will pass my love for Barca to my children, like my family did with me. And you know me, sooner or later, I’ll be back.

Pique retired from international football in 2018 and scored five goals in 102 appearances, while also making 10 appearances for the Catalonia representative side.

He won the 2010 World Cup, following it up with the 2012 European Championship.