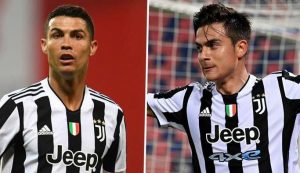 Juventus are looking for a new leader in the final third, but, Giorgio Chiellini goes for  the Argentina forward .

Chiellini accepts that Bianconeri were overly focused on Cristiano Ronaldo during the Portuguese’s time at the club.

But, Paulo Dybala being tipped to step up and become the team’s new talisman.

Ronaldo had been the centre of attention for Juve throughout his time in Serie A.

But, Chiellini believes Argentina international Dybala is ready to fill a sizeable void and become the go-to man for attacking inspiration.

“When you have a world-class player like Cristiano, you cannot help but use the team to play for him.

We must be grateful to Cristiano for all he did during these years at Juventus, but we carry on.

“This will be Paulo Dybala’s team.

Over the last couple of years, he lowered his average goals because of Cristiano’s presence.

But, he is a key player for this team and that is recognised by everyone.”

Dybala is another centurion for the Bianconeri, having hit 101 goals in 256 appearances since joining from Palermo in 2015.

He is yet to sign an extension to a contract that is set to expire next summer.