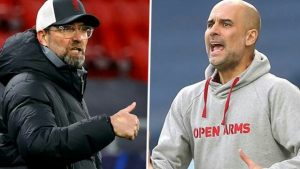 Manchester City manager Pep Guardiola has said Liverpool should “go to court” if they don’t like his club’s expensive transfer moves in the wake of criticism from Jurgen Klopp.

Klopp recently claimed Guardiola has no limits in his spending, implying an unfair advantage for the Spanish head coach. But Guardiola believes Manchester City are adherent to Financial Fair Play protocol and are simply benefactors to good ownership.

The managers have been responsible for the past four Premier League titles (three for Guardiola and one for Klopp), so their rivalry carries a tension that at times spills over into the press.

“Some owners want to benefit, our owners don’t want any benefits. So they don’t invest in the team, while we invest what we can,” Guardiola said.

“Before there were only one or two clubs. Now there is Chelsea with [Roman] Abramovich and our club with Sheikh Mansour. They want to be buying into football. What is the problem? We have limits for Financial Fair Play and if they don’t agree [with City’s spending] they can go to court and make a statement.

“We bought Jack Grealish because we sold [players] for £60m so, in the end, we have spent £40m. We follow absolutely the rules. At our club, the owners don’t want to lose money of course but they want to spend, so we can do it.

“Years ago, when Manchester United won a lot of titles, it was because they spent more money than other clubs. Do you remember that? At that moment Man City couldn’t do it because we did not have the owners we have now.”

Summer spending for the clubs

Manchester City’s banner signing has been winger Jack Grealish, recently purchased from Aston Villa for £100 million ($138m), and they’re reportedly still in the market for a big-money striker.