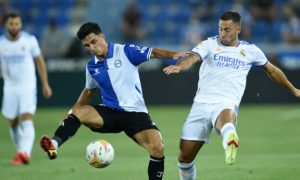 The Real Madrid forward as featured only intermittently for them since moving from Chelsea due to a succession of physical problems.

Eden Hazard vowed his ankle troubles were now behind him after the Blancos kicked off Carlo Ancelotti’s second spell as coach in style.

The Belgian played just over an hour of Saturday’s 4-1 thrashing of Alaves and provided a fine assist before being replaced by Vinicius Junior, with Madrid already cruising at that stage thanks to Karim Benzema’s double and a strike from Nacho.

And having seen his time at the Santiago Bernabeu severely affected by injury, Hazard believes he has now turned a corner.

“My ankle injury is a thing of the past, it’s already out of my head,” the ex-Chelsea man told sportdaylight after the game.

“I enjoy playing with Benzema, we know each other very well and it’s easy to play with him.”

“The feelings are good, I’m feeling good, we want to win La Liga this season.”

The clash also saw Gareth Bale restored to the attack alongside Hazard and Benzema after a year on loan at Tottenham, and while the Welshman did not score on his return to La Liga Ancelotti believes there is better to come, while praising the improvement he has seen in Madrid’s two-goal hero.

“Benzema is a much more complete player now compared to the one we saw 5 years ago,” the veteran coach explained.

“I think Bale is going to improve. His condition is not entirely optimal. I see him well, motivated.

“I asked Bale and Hazard to play between the lines. The first half was more difficult. Then I took them off when game was easier for them. Hazard’s assist for Benzema was superb.”

Hazard joined Madrid from Chelsea at the start of the 2019-20 season, but physical problems have meant he has struggled to make an impact at the club, playing just 16 Liga games in his debut term and 14 last time round.