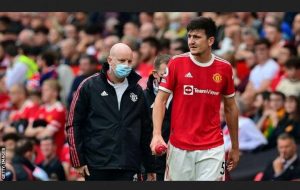 Maguire, 28, will be absent for Wednesday’s Champions League match against Villarreal.

And is likely to miss England’s World Cup qualifiers against Andorra and Hungary in October.

Read Also: “They Are Such A Big Club,” Juventus Demand Respect Despite Struggles-Thomas Tuchel

“Harry is more or less definitely out. It doesn’t look good,”

“It’s his calf. That might take a few weeks,so let’s see how quickly he recovers.

Of course he was hoping to play against Villarreal.

He missed the last game we played against them [in the Europa League final in May].”

The severity of Maguire‘s injury means he is unlikely to be included when,