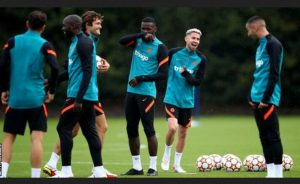 Chelsea lost 1-0 to Manchester City in the Premier League on Saturday, their first defeat of the season.

They will be without Mason Mount, Christian Pulisic, N’Golo Kante and Reece James for their Champions League game at Juventus on Wednesday.

Kante has Covid-19, while attacking midfielders Pulisic,Mount and right-back James are injured.

Massimiliano Allegri’s Juve are four games unbeaten and have moved up to 10th in Serie A after a terrible start.

“They are such a big club,” said Blues boss Thomas Tuchel.

“Yes they have had some troubles, a rough start but they were very convincing in the Champions League [a 3-0 win at Malmo].

“They are reliable. It is a no-brainer, they demand respect.”

Chelsea beat Zenit St Petersburg 1-0 in their Group H opener and have only conceded,

four goals in 14 Champions League matches since the start of last season.

“Maybe there is expectation,”

“We came from a role that wasn’t favourites last season and we got better with every match and now we are seen as a real contender.

“Now it is easy to make us the favourites.

We have the experience that means there is a higher value and motivation to play against us.

And, We have to accept this. We are not favourites for this title.”

Juventus are without former Chelsea striker Alvaro Morata and Paulo Dybala through injury.