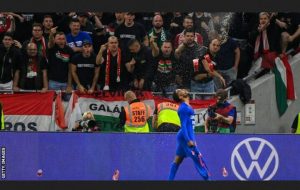 Hungary will  play two matches behind closed doors ordered by Fifa due to the racism English players experienced at the World Cup qualifier in Budapest on 2 September.

“Fifa takes a clear zero tolerance stance against such abhorrent behaviour in football,”

The governing body added that it remained

“firm and resolute in rejecting any form of racism and violence as well as any other form of discrimination or abuse”.

In June, Uefa fined the Hungarian federation £85,500 and ordered a three-game stadium closure.

The final match being suspended, for discriminatory behaviour by their supporters during Euro 2020.

Read Also: ‘Ronaldo Is On Another Level To Cantona’ – Scholes

Fifa game rather than being under the control of Uefa, who did not ask for the punishment to be transferred.

Fifa said it imposed the sanctions

“after analysing and taking into consideration all the circumstances of the case,

specifically the seriousness of the incidents (racist words and actions, throwing of objects, lighting of fireworks, blocked stairways)”.

Raheem Sterling and Jude Bellingham were both targeted.

England players were pelted with objects in the second half,

and a flare was thrown on to the pitch by the home fans at Puskas Arena.

The England players were also booed as they took the knee before the match at the 67,000-capacity stadium.

Sterling was pelted with paper cups and bottles when he opened the scoring for England.

After a flare was thrown on to the pitch as Harry Maguire put Gareth Southgate’s side 3-0 ahead.

Southgate also had ice thrown at him by fans during his post-match interview with BBC Radio 5 Live.

After the game, anti-discrimination body Kick It Out criticised Fifa and Uefa for their handling of Hungary’s existing ban.

“The question for us is why Fifa didn’t act to prevent this,

and why the global football system didn’t work together to prevent this,” said Kick It Out chief executive Tony Burnett.